Public Art Commissioning from Within a Community.

Built in 1971 and run in co-ownership by the 130 diverse residents, with little to no hierarchy, it can provide an unusual example of bottom up public art commissioning, with a sustainable community legacy. Residents cultivate their homes in constant collaboration, whilst continuing to go about their lives locally and globally.

In close proximity to this unusual street is Goldsmiths University, City (Canary Wharf), Trinity Buoy Wharf and the Laban Centre as well as Deptford High Street, home to Deptford X annual arts festival (for over a decade); recently hosting a Tesco Metro (as of the first week of October 2009) and plans for a further store where the much loved flea market currently exists.
The new railway being built next to the developing Sainsbury’s has also had an impact (1).

‘Sanfordites’ have involvement in all these areas that operate with such different organisational structures, as well as the more underground creative and eco schemes. It is a fascinating resource to draw from when thinking about private and public ownership of land, urban planning and commissioning of schemes.
Describing some of the projects that have taken place at Sanford from the inside to out, I hope to provide a helpful insight to these commissioning processes. This information has been gathered through interviewing (chatting with) people involved with the projects and through personal experience as a participating resident since 2007; which is in keeping with the organic nature of the place.
The following text consists of a brief overview of how the street was set up and currently functions as a piece itself, and three internal projects; the development of the garden, a bike shed and a carbon reduction project that includes new kitchens.

Overview of Sanford Cooperative
This street was originally built as a solution to student housing problems, by a core group of people who then lived there. They took out a loan and built 14 houses with 10 rooms in each and 6 flats on wasteland creating a dynamic community. The street has since hosted a biker community and now accommodates many artists, musicians and environmentalists and a variety of others with different interests.
The safety - psychological and actual security of regular communication (2), cheap rent (£50 a week inclusive) and active social life within the community creates an incision, an air pocket to the general functioning of London – the private and public housing schemes and the squatting movement. This is legal whilst autonomous.

It is encouraged and expected that residents work for the coop to contribute more than just financially, which happens through taking officer positions, general maintenance and other activities that can help sustain and move the project forwards.

Some people are encouraged by this situation to be extremely pro-active; some appear to take advantage whether consciously or by default.

“In the 80’s it was almost a squat, there was no managing agent and people weren’t paying their rent. Hyde Housing (housing management) were then brought in and after a few years CDS (Co-operative Development Services) were employed by the coop to manage their finances.“ G. White (previous Gardens Officer)

Residents in breach of their contract through uncooperative behaviour for example not paying their rent, and embarking in substance abuse can be evicted. In the past it has been a drugs haven and is currently more of a pro-active environmentally conscious and socially aware community. This is an example of a project that grows and adapts, without a detached group leader to enforcing behaviours. Residents move towards greater care slowly and consistently.
“Ten to fifteen years ago Sanford was run by three people whom lived in the flats, the shift to democracy was a long process. The community now runs the cooperative after collectively deciding this is what they wanted as elements were clearly not working.” G. White (early Gardens Officer)

“We wanted to become more eco at Sanford so a core team of four formed to look into this. It started with the boilers, which were old, about fifteen years. Possibilities were taken to meetings and blossomed out to green roofs, etc.” A. Cormick (most recent Gardens Officer)
Here follow the examples of projects that have developed within the project. How they were instigated, implemented and continued with consideration to the working methods and approaches of individuals. With their differing approaches, experience and interests, it aims to convey how teams have formed and adapted to the in house and individual project aims.

C60 / Kitchens
“This was top down, so I didn’t like it – the work would be project managing rather than creative. I prefer to find practical solutions as opposed to paper planning. Also I thought a district heating system – one boiler rather than seven would be more appropriate, I didn’t like the electric gadgetry.” G. White
“Sanford projects are a bottom up process. As opposed to the top down commissioning nature of the council and most corporate organisations” A. Cormick

The Energy Saving Trust provided a survey, grant and feasibility study. A financial study looked into how much needed to be borrowed. Grants were received from the council and the energy savings trust. £600,00.00 came from Sanford’s savings and Triodos bank provided a loan of over £1000,000.00.
“Wind and ground sources were rejected and an initial district heating with gas back up design was rejected by members. Boilers have now been split between two houses, creating shared responsibility, solar hot water and heat recovery systems have been installed, lighting and insulation improved.” J. Noble (Current elected Chairman)
Through an in house questionnaire used at Sanford for the C60, kitchens came up overwhelmingly as needing improvement; so the coop employed an interior designer from the Centre of Alternative Technology and re-employed the J3 project managers – who had managed much of C60. Three kitchen proposals were put forward and residents made various style decisions.

There has been deterioration of the kitchens, which is disappointing and will hopefully be followed up though the final payments have been made. One of the problems of working without a formally assumed role and shared responsibility; is that it is easy for issues with contractors to slip through the net.

One house opted to create their entire kitchen, eventually opting out of the overall project. The result is successful, though all of the residents that were originally keen to do this moved out during the process, for various reasons
Following a long building process and kitchen sharing during the refurbishments, they are the heart of the homes, where people relax and spend time together.

Time goes over – we’re learning while doing, in our spare time, so people need to be patient.’ A. Cormick

Sanford won the Inside Housing Refurbishment award of the year 2008 for the carbon reduction project.

Ponds and gardens
The gardens are crucial to the sense of community at Sanford Walk, providing valued social space used for varied activities including work, study, social gatherings, exercise and performance. They are a key reason why many of the residents live here and attract national and international interest. (3)
“There was little design – drawings right at the beginning were made about the site, but the project was largely made up as it developed, bearing in mind options that surfaced along the way.” G. White, on building a water feature; which has resulted in an elaborate design based on an eight star constellation. This method is applicable to the outdoor space in general.

White asked at a COM (4), for an £8000.00 budget to complete the ponds, which was agreed. Three ponds were then created where a large hole had already been excavated. It took about three months to run ideas through the resident builders – deciding on methods.  White admits he became quite dictatorial once the team (of three) had started working.

It took over a year to get the large water feature, that you can walk around and sit in / on, functioning. New fish were bought and added to the pre-existing stock. The Coy Carp grew according to the depth of the pond and two new catfish unfortunately ate the smaller fish. Since completing the ponds and to this day “there been no real accidents, though a lot of people have fallen in.” G. White.

There was no evaluation or feedback process, or opening party. Filling the ponds with water is the only identifiable ending to this densely utilised and much loved project.

Bike Shed
A recent new building designed by resident architect Christos Choraitus, commissioned and built by the residents is adjacent to the wall and proposed sound barrier for the rail track, and includes a roof garden with fruit trees, plants and flowers.
“Bikes had always been a problem, it was an ongoing issue at meetings. It went quiet for a year then Christo’s idea popped up in 2005, already designed. People asked questions so he created a model, which answered them, along with detailed, cool drawings. The design and the budget were approved, it was to be paid by Sanford.” Simone Koch (resident).

A further two years passed at which point there was a renewed interest and belief in projects from new tenants. The foundations were marked out in real space, passed by the majority of residents, materials ordered and an in house team identified who could help build the structure. There was no deadline other than the architect’s plans to go travelling for a year, in approximately one year’s time.

There were two opening parties, one for the main structure of the bike shed as part of Sanford Arts Day with a performance amalgamating three projects: “I” piece (‘my’ art project), The Impossible (band and dancers) and the bike shed. This took place throughout the street also celebrating the new kitchens with artwork displayed on the walls and in the windows.
When the roof garden was complete there was another celebration, purely of this project where press were invited along with people working in design and environmental fields.

Conclusion
Self-sustaining, engaging and amalgamating the local community, this street naturally encourages and facilitates further initiatives and collaborations. Creative projects take place in the locality and reach out nationally and internationally. It can be considered as an exemplary piece of community and / or public art, a sculpture, forward thinking grassroots urban planning and intervention.

People have different ideas, different communal living ideas – a lot have Westernised conditioning, that it’s ’their project’ and adopt varied levels of consultation.” A. Cormick
Things freed up once there was a democratic way of working and an elected chair. Sanford was changing, with only three to four vacancies a month compared to the previous twelve or so; it was becoming more stable. It’s now seen more as a street of homes because of this duration. People are more inclined to look after the place if staying on.” G. White

With the current financial climate, environmental awareness and global awareness rising; this small slice of land and the people that live here are providing a contemporary and achievable solution to many of the wide spread issues of city dwelling on an individual and collective basis. John Vidal of The Guardian, describes it as ‘one of the most ambitious low carbon developments in Britain today’. (5)

“In the years I’ve been here the area has been gentrified in light of some unpleasant history. The whole area was known for violence and drugs. That is being changed. Though we’re not part of the deliberate government project to develop the New Cross area, it is happening – we’ve changed ourselves.” J. Noble 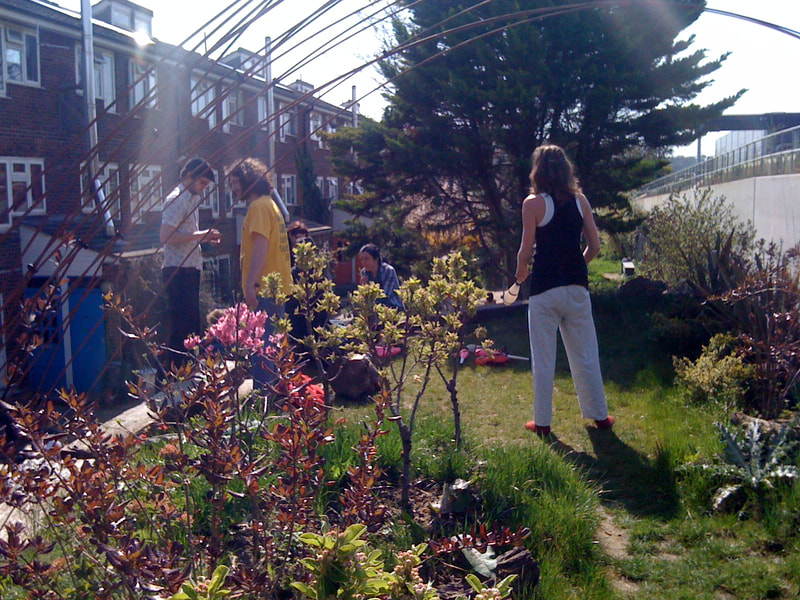 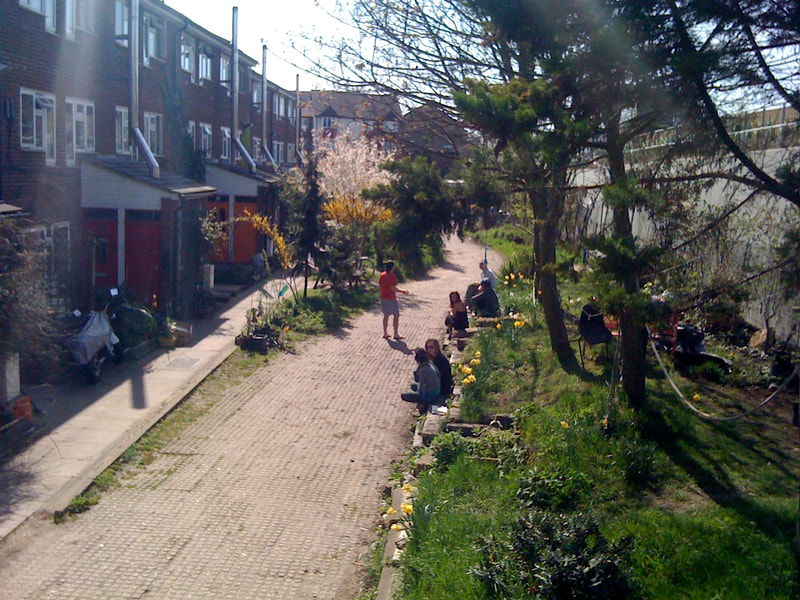 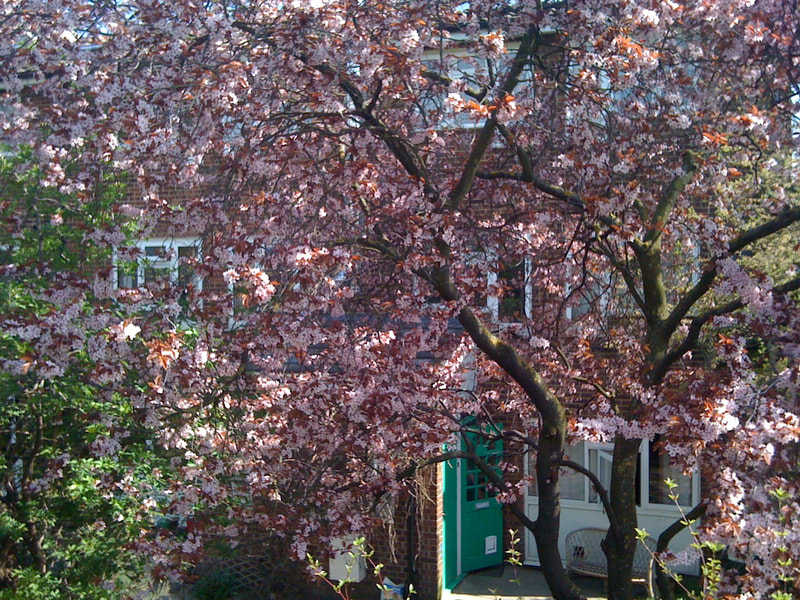 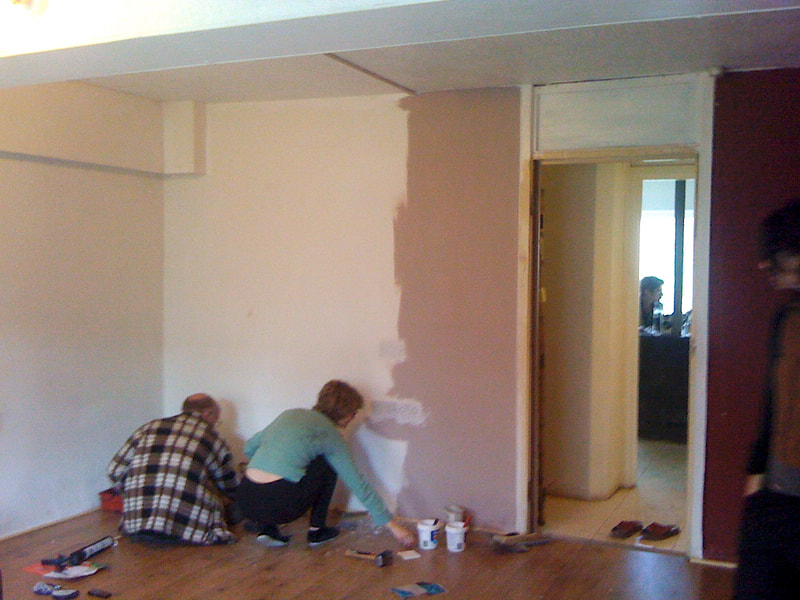 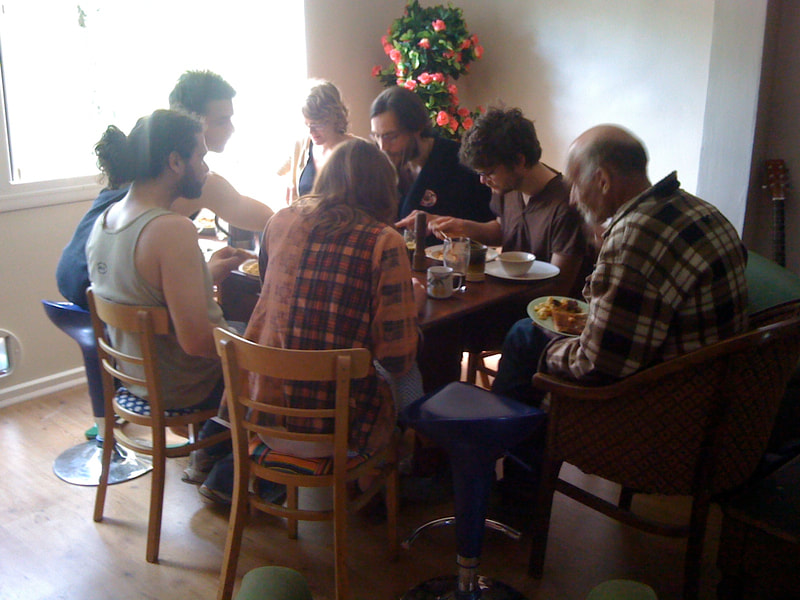 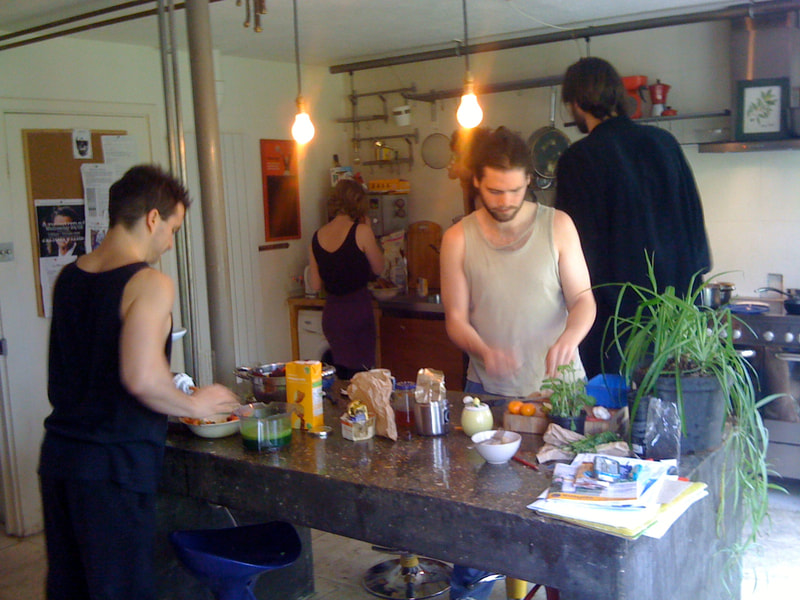